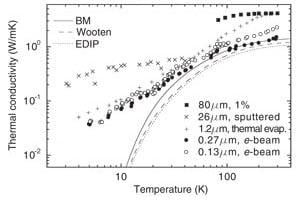 Background
Thermoreflectance (TDTR) measurements at room temperature for an 80 micron a-Si sample show at more than a 2-fold increase in thermal conductivity compared to submicron samples having thicknesses of 200 nm and between 1 and 2 microns. See Yang et al., “Anomalously high thermal conductivity of amorphous Si deposited by hot wire chemical vapor deposition,” March, 2010. http://users.mrl.uiuc.edu/cahill/asi_v3.pdf On this basis, it was concluded: (1) phonons with a mean free path of ~ 100 nm make a sizeable contribution to conductivity, (2) size in terms of the sample thickness was not expected to make a significant difference in measured conductivity for the 80 micron and 200 nm samples, and (3) current theoretical methods cannot account for the nearly 40 percent contribution from phonons with a mean free path between 100 to 600 nm as inferred from the TDTR measurements. See http://cdac.ciw.edu/component/content/250.html?task=view

Problem and Hypothesis
Heat conduction based on atomic vibrations by Debye’s phonons has served well at the macroscale, but not in comparisons with experiment at the nanoscale. Like the difficulty in explaining the higher conductivity in the 80 micron samples, agreement if any is found by hand waving” the phonon wavelength that agrees with experiment, e.g., minimum thermal conductivity where the Boltzmann equation is used with the mean free path set to a “lattice” constant, to a “fracton” model in which heat is transported by anharmonically assisted hopping of localized vibrations, to diffusion-like conduction, with heat transported mainly by extended states but which do not have “good” wavelengths. Ibid.  The question may be asked:

Are phonons the mechanism of heat transfer at the nanoscale?

Alternatively, is the size effect of quantum mechanics at play in extending the validity of classical heat transfer at the macroscale to the nanoscale. But there are more basic questions:

At the nanoscale, does heat conduction even exist?

Indeed, if there is no conduction, calculations of thermal conductivity based on phonons are meaningless thereby avoiding the “hand-waving” of wavelengths to explain experiments. But if so, the remaining question is:

What is the heat transfer mechanism at the nanoscale?

If a heat transfer mechanism at the nanoscale is hypothesized that promptly conserves absorbed heat without any need to include conductive heat flow, the difficulties in explaining experiments by phonon wavelengths would be avoided. Bulk conductivity could then be assumed at the nanoscale even though there is no heat flow. Indeed, if such a heat transfer mechanism can be shown to exist, then all the above questions are answered.

QED induced EM radiation
One such heat transfer mechanism at the nanoscale that avoids phonons is the theory of QED induced EM radiation. QED stands for quantum electrodynamics and EM for electromagnetic. By this theory, absorbed EM is promptly conserved by the QED induced creation of photons within the nanostructure that then are emitted to the surroundings as non-thermal QED radiation at UV or higher levels. What makes this possible is that quantum mechanics requires the specific heat of atoms at the nanoscale to vanish. See  http://www.nanoqed.org/ at “Nanofluids and Thin Films”, 2009.

Vanishing specific heat may be understood from the fact the thermal energy of the atom given by the Einstein-Hopf relation depends on wavelength under the constraint that only submicron (< 1 micron) wavelengths are allowed to “fit inside” nanostructures. But submicron wavelengths are only populated at temperatures greater than about 6000 K. At ambient temperature, therefore, the heat capacity of nanostructures is “frozen out”, and so absorbed EM energy cannot be conserved by an increase in temperature. Conservation may only proceed by the QED induced frequency up-conversion of absorbed EM energy to the fundamental resonance of the nanostructure. Heat conduction is negated because the prompt conservation of absorbed EM energy by QED emission is far faster than the time it takes for the phonons to respond. Ibid, at “QED induced heat transfer”, 2010.

Discussion
The prompt conservation of absorbed EM energy by QED emission means conduction does not occur at the nanoscale, and therefore phonon explanations of reduced conductivity in thin films are meaningless. Indeed, bulk conductivity at the macroscale may be assumed valid at the nanoscale. Ibid

The thermal conductivity by TDTR measurements of submicron samples is only apparent. Conductivity appears reduced from that of bulk only because QED emission was excluded in the heat balances. If included, there is no conduction and bulk conductivity is still valid. What this means is that the a priori assumption may be made that absorbed EM energy of any form by a nanostructure is promptly emitted as QED radiation at UV or higher levels Hence, Molecular Dynamcis (MD) simulations to determine the response of the nanostructure to the absorbed EM energy are no longer necessary.The only relevant MD simulation might be the interaction of the QED emission with the surroundings.Ibid

1. The conclusion that size in terms of the sample thickness is not expected to make a significant difference in measured conductivity for the 80 micron and 200 nm samples is negated by the size effect of quantum mechanics.

2. Conductivity appears reduced in submicron samples because QED induced radiation was excluded in the heat balances. If included, there is no conduction, and therefore the sample may be considered to have bulk conductivity under the condition of no heat flow. In fact, both submicron and 80 micron samples have bulk thermal conductivity.

3. Conclusions that phonons with a mean free path of ~ 100 nm make a sizeable contribution to conductivity not only contradict the fact current theoretical methods based on phonons cannot explain the higher conductivity of the 80 micron sample. In fact, both are meaningless because there is no conductive heat flow at the nanoscale.

4. TDTR measurements are likely caused by QED induced photons and have nothing to do with phonons.

5. The response of nanostructures to absorbed EM energy need not be determined by MD simulations; the only relevant MD simulation might be the interaction of the QED emission with the surroundings.